Briefly, the app demonstrates the Haptic feature of iPhones to UX/UI designers and developers. In this way, they can understand how each different haptic feels (e.g. vibrations) in order to use it better in their iOS applications. 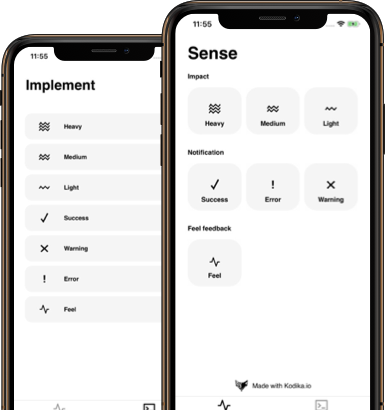 What is haptic feedback?

According to Wikipedia, Haptic technology refers to any technology that can create an experience of touch by applying forces, vibrations, or motions to the user.

Simply put, haptic feedback (also known as haptics) is the use of touch feedback to the end-user.You know how your mobile phone vibrates a tiny bit when you tap one of the navigation buttons? That’s haptics at work

How the idea was born

A few months ago, while on a brainstorming session with our team’s UX designer, the idea of a haptic feedback addition to the app came up. Surprisingly, I found out that the design team was unaware there are several options to choose from when it comes to haptic feedback. That was my aha moment for Haptic Sense! The idea of a simple app, displaying all kinds of haptic feedback sneaked into my mind.

More about the app

Haptic Sense is the easiest way to preview and implement all haptic feedback options that iOS offers (e.g. vibrations). Previewing the haptic feedback itself on a physical device and feeling the sensation of any option, is a great way to understand how it works.

Haptic Sense started as a personal project. However, today has thousands of downloads and made communication between developers and designers much easier and straightforward.

If you have any suggestions or feedback let me know

Haptic Sense started as a personal project. However, today has thousands of downloads and made communication between developers and designers much easier and straightforward.

Fantastic idea for an app.

Talking about the marketing side / ASO… how did you succeed to promote the app to get the first few 100 or 1,000 downloads?

In fact we didn’t promote it. We haven’t spend any money on paid marketing and we haven’t launched it in ProductHunt or similar sites. It looks like that when it was released, there was a big need for a product like this and there was no competition. Even some of the AppStore comments show that. About ASO, of course we used some good and relevant keywords but nothing special.

Great - sounds like it was a perfect product for a need that wasn’t fulfilled. That’s the best kind of scenario. Well done finding it!